I’ve never had homemade Challah. I’ve only bought from bakeries, and they’ve always been sweet, and fluffy, but not very chewy. I always considered it a fattening bread due to the amount of sugar and oil necessary to give it its character, and extend its shelf life. And I usually add to those calories by making a Ham and Cheese Strata, so I didn’t really expect much different making my own. I was impatient waiting for it to rest and rise, but I understood. I only hope it understands me too and doesn’t “hang around” my belly (if you know what I mean). I take after my family the way I love bread. Well, much to my surprise, and in spite of the honey, this Challah wasn’t so sweet, and it had a marvellous texture—fluffy yet very chewy. The biga was definitely present. I’m perfectly turned around.

As you all know, I totally underestimated the amount of time the biga took to “cook.” It’s such a small amount of yeasty dough that transforms into a fermented, sour mass. We haven’t made biga since the pannetone, I think (or maybe one other time). I was curious; what's the difference between biga and dough starter? As it turns out, biga is used when a light open texture is desired (remember the Pannetone?) and it makes the bread less perishable. While it’s usually used in Italian breads, it’s application is perfect here because Challah has a tendency to go stale quickly. Ah! I see said the blind man.

I chose this recipe for December because we are right on top of Hanukkah, and I was thinking of Mendy. Sorry to see him leave us, but I certainly understand and wish him well. One other note: as per Rose's suggestion, I used the recipe from Rose's blog page, rather than the Bread Bible.

As I mentioned above, biga is certainly well worth the time, as it adds a complexity that rarely exists in store/bakery bought Challah. 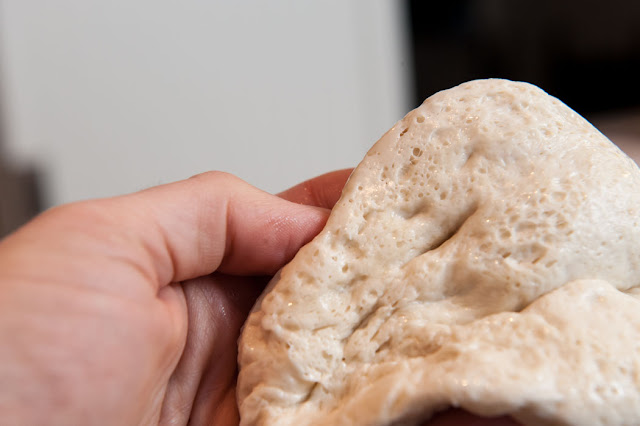 I like cutting pieces of biga and soaking it in water. Not too difficult.

The dough mixed up well and was just a little tacky, the way Rose described.

My challah dough took two hours to double in size and when I removed it to make the business folds, it was soft and very tender.

Overall, this dough, like all bread doughs, was compliant and cooperative. All I had to do was press it into place—no rolling required. Too easy really.

I’ve never done a 4 braided bread before. I didn’t understand what was meant by starting in the middle, as I could barely start at the beginning.

I used a very diluted egg glaze with poppy seeds.

Bake the Challah
I know from eating many Challah, that there isn’t much of a crust to speak of. Mine baked in the minimum amount of time and I had no trouble with it over browning. I removed it from the oven when the internal temp reached 203-205 degrees.