Basic Hearth Bread Round Up 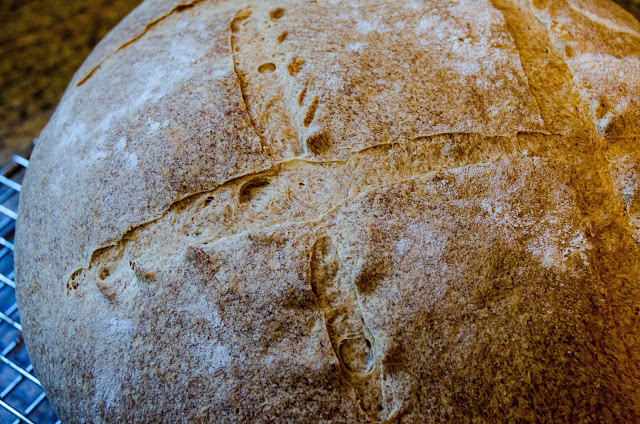 
"Soul of simplicity", that is how Rose describes her Basic Hearth Bread,  "containing only flour, water, yeast and salt with a little honey for sweetness and a golden crust."  It was a resounding success with all the Alpha Bread Bakers.

Marie likes this bread very much and has made it often, to the point where her loaves could easily pass in a bakery shop case with perfect slashing and browned crust.  She especially likes the slight bit of nuttiness whole wheat flour gives in this recipe without any bitter taste.  Marie first learned the business letter fold years ago from Rose even though it's quite common among bread bakers today but for her, it was Rose who introduced her to this technique. Marie likes it for sandwiches and for morning toast.  "I almost resent it when bread doesn't toast well.  That's part of its job."  Touche Marie, touche!

Basically Delicious Hearth Bread is how Elle describes this basically amazing bread.  She had two teenage sous chefs by her side to "help"-if drinking warm chai lattes and texting is helping.  Although, her daughter's friend was quite intrigued with the scale, never having seen ingredients measured by weight.  Just wait, chemistry class is right around the corner!  She found the only down side to the recipe was the rise times, only due to impatience.  Totally understandable; this is a bread that looks so good on the cover of The Bread Bible.  The lovely golden, tasty loaf of bread transported her back to fancy Italian restaurants where waiters whisked away bread crumbs off the table with their silver scrapers.  Sitting on the back deck with horses just off in the distance, not a snooty waiter to be found.  Just glorious and delicious homemade bread straight from the hearth.

Michele was the only one who made the Velvety Buckwheat Loaf variation since she's made the Basic Hearth Bread more times than she can remember.  It was the word "velvety" that intrigued her and rightly so.  The pre-ferment includes sour cream which she feels contributed to the velvety texture. Michele has become quite adept with slashing the top of the dough and this bread rewarded her with perfect oven spring, opening up the deep cuts.  She describes the flavor as similar to pumpernickel but without the prominent rye flavor in darker breads.  While this bread was a picture perfect success, Michele prefers the flavor of the Basic Hearth bread.  Bonus points Michele, for trying something new!

Nancy chose to bake the classic loaf shape for her Basic Hearth Bread, thinking ahead to the versatility of the shape.  She got tricked again by the dry ingredient step, forgetting to hold back the salt until after the first ferment but no harm, no foul!  And here is where Nancy's expertise really comes into play; noticing the dough was a little dry and not sticking slightly to the bowl as Rose describes, she sprayed water right into the mixing bowl.  Genius!   Her bread turned out lovely in the loaf pan but she is going to figure out the correct amounts of ingredients for her size of loaf pan.  Keep us posted, Nancy.  We probably all have an odd sized loaf pan or two.

Kristina takes multi-task baking to a new height; she baked two different kinds of pies and The Basic Hearth Bread overlapping a two day period.    Kristina, who starts off saying "Pretty straight forward. Grind the wheat".  This is just too charming for words!  Only an Alpha Baker would include grinding one's own wheat as straight forward.  And since it has a bit of honey in the recipe, well wouldn't it be wonderful if she had her own bee hive now, too?  If anyone can successfully raise bees, it will be Kristina.  Go have a look at the posted link on her site for the snazziest bee hive ever.  Her dough bubbled up nicely and mixed together well but she forgot a step with her baguette pans, which is a rare occurrence for Kristina.  She can make bread in her sleep.  The bread stuck a bit to the pan but really, with this wonderfully flavored fresh bread covered with fresh tomatoes, who could fault such delicious crostinis for missing a few crumbs?

There comes that defining moment in a new bread baker's life when it just all clicks together.  The Basic Hearth Bread was that moment for Vicki.  Not growing up in a bread baking family, yeast was a foreign thing.   This dough is the first bread dough where the "feel" started to all make sense.  Pretty amazing but that just goes to show what a great guide The Bread Bible is.  This bread won rave reviews and didn't last nearly long enough.  It made great sandwiches and morning toast with tea.

Hooray for Catherine !  She had success with elusive oven spring.  Even while not feeling well,  mixing the dough together for Basic Hearth bread was simple enough that she could manage it.  Trying a suggestion of not letting the dough rise too much during the final proof, she gave it a good slash, popped it in the oven and Voila!  Oven spring as evidenced by the opening of the slashes during baking.  Just look at that loaf of this exquisite bread! And then on to slathering a toasted slice with Vegemite!  We in the U.S. pretty much heard of Vegemite from lyrics of the  popular song Land Down Under by Men At Work.  Catchy tune that!

To date, our little gaggle of bread bakers have collectively baked sixty-six loaves of bread!
Posted by Vicki at 10:56 PM