Prosciutto Ring Round Up 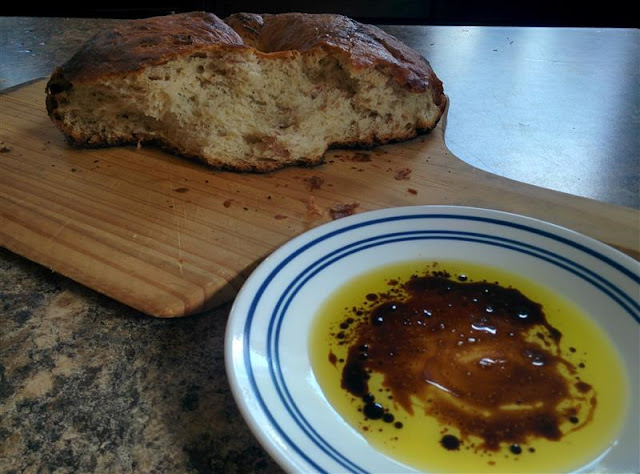 Rose never dreamed she would have recipe in hand for the Prosciutto Ring from her neighborhood bakery, Zito's.  Luckily,  one of the owner's sons described the making of the bread in perfect detail, enabling Rose to recreate this flavorful, simple bread.

Kristina coined it best when she said "This is another one of those recipes that I would never try making if it weren't for a bake-through project like this, so I'm glad I signed up for this group."
Making this bread transported her back to Italy where she toured a prosciutto producer's facility in Modena. Kristina even used malt syrup.  Her husband Jay pulled out the authentic balsamic vinegar they had been saving from Italy and while happily dipping warm bread in oil and vinegar, savored their wonderful memories.   Kristina also points out that she would not have nearly as much experience baking different things if it weren't for the past five, six years of baking through Rose's Heavenly Cakes, The Baking Bible, and now The Bread Bible, which have been "like taking a series of classes from a master chef".  I think you summed it up perfectly for all of us, Kristina.   Mangiamo!

Nancy was caught in a bit of a muddle while going over the recipe, noticing there was no mention of lard in the ingredients in her book yet lard was mentioned in the anecdote heading.  Once again, the Facebook Bread Bible Bakers site solved the mystery.  Nancy has one of the earliest copies of the book before Rose revised the recipe which doubled the meat quantity.  Nancy resourcefully substituted bacon fat for the lard and spicy Spanish-style chorizo for soppressata,resulting in a wonderfully tasty bread for supper.  We are so glad Nancy is baking bread with us and her family next door is probably more so!

"A coarse, rustic bread just waiting to be ripped apart" is how Jeniffer said it best when describing her first bake with The Bread Bible Alpha Bakers.  With her photograph of a charming antipasto platter, the Prosciutto Loaf got star billing. Jeniffer comes by way of talented genes; her grandfather and uncle were master bakers with their own bakery in the northern suburbs of Melbourne.  Her great uncle lectured at the culinary university in Melbourne, particularly on wheat production. Jeniffer has carried on the family tradition with fabulous baked creations that honestly look like works of art.  Read her bio for the subjects she studied during her technical school years, quite impressive. Jeniffer rolled up her sleeves and rendered wet bacon fat into lard for this loaf.  Prosciutto, salami and bacon rounded out her  bread into a substantial, meaty ring. She has excellent suggestions of using leftover Christmas ham to make a loaf for Boxing Day, and delicious vegetarian ideas.

Peggy loved the crackly black pepper bits and along with her family, couldn't stop eating the flavorful Prosciutto Ring. In fact they finished it in under one day.  Peggy bought spicy Sopressa but decided to use salami and bacon with the prosciutto, opting for bacon oil instead of lard. She also added some leftover sour dough to the mix.  All in all, this made for a successful loaf of very tasty bread.

"Meat, meat, glorious meat" exclaimed Catherine in describing her Prosciutto Ring.  The dough, with the pink combination of meats at first did not look  promising, but once baked "melded into deliciously savoury.flavour".  Incredibly easy to make in the stand mixer and fast to rise,  the texture was wonderful and not doughy, as one might expect, even with her "It'll do principal" which she suspects is foreign to Rose!.   All in all, a big success.

Kim loved the perfume of the prosciutto against the fullness of the spicy, black pepper off set by the salty cure.  The dough was mixed together in a very special bowl, a gift from her mother; a huge beauty weighing in at nearly eleven pounds and seventeen inches in diameter.  The bread crumb turned out perfectly and more than justified the bowl's  rightful place in Kim's kitchen.   She found the delicious bread more mellow the next day, with the soft crumb and chewy crust which Kim found to  perfectly compliment a bottle of red wine.

Michele knighted her ring St Thomas's Bread, since she baked it on the feast day of St Thomas the Apostle, without prosciutto.   Michele has baked weekly out of The Bread Bible for many years yet this was one recipe that she had not baked before.  Joining up with the Alpha Bread Bakers, the opportunity came early to tackle the Prosciutto Ring.  She substituted capocollo for prosciutto, which is a traditional Italian pork cold cut.  The lard lent a silky feel to the dough, even if not highly recommended for cardiac rehab patients.   Michele's ring of rising dough was perhaps the most classy to date; under an exquisite crystal cake dome.  Brushed with bacon fat and baked to perfection, Michele declared the ring of bread crusty, fragrant and delicious served with shaved slices of Gruyere cheese. So one more in Michele's repertoire, which is why she loves the Alpha Bakers!

Elle aptly described the Prosciutto Ring as stuffed full of three kinds of meaty goodness, plus lard and bacon fat (or butter) for good measure. The catch is, as a vegetarian, this wasn't something to taste-test. Luckily she has a built in appreciative audience with her husband's co-workers so all was well.  The unseasonably high temperatures turned her kitchen into the ideal proofing box. The meat sprinkled dough resembled fun confetti and the leftover bits were eagerly consumed from a less than patient canine sous chef.   The warm bread reminded her husband and teenage daughter's friend like pizza without sauce.  They suggested a hearty marinara for dipping on the side.. She found the bread so easy to make and it smelled wonderful, which is saying something for a vegetarian!

Like Nancy, Vicki's book was a case of the missing lard.  With the same early edition, the recipe was slightly different than the revised edition, but this suited a vegetarian just fine!  With the lesser amount of called for proscuitto and no other meat, it would be easy to taste test a crumb here and there, especially using butter instead of bacon fat.  The addition of olive oil rather than lard made for a light and fluffy dough, with the faintest hint of olive oil flavor.  A fan of black pepper, the flavor shines through in the savory bread.  It was very well received among the Italian inlaws.

All in all, the Prosciutto Ring was a resounding success for all who baked Rose's favorite neighborhood bakery's bread.


And finally, a big resounding thank you to Glori.  I don't think there is anything more frustrating than having an idea which is near and dear to one's heart yet lacking the expertise to execute it.  Glori took my original idea of starting this Alpha Bread Bakers group and brought it to life with her exceptional technical skills.  Not only did she set up this beautiful site but also carried the load of writing clever  Round Ups.  .

Life is full for Glori and she has stepped down from carrying the technical side of things but her founding efforts will be endlessly appreciated.  I was hopeful perhaps three of us would bake bread together but we have quite a nice group now.  We have a gathering place where we can enjoy the baking and breaking of bread together for many days to come.   A place to encourage, inspire and applaud our yeasty efforts.  Thank you Glori.  -Vicki
Posted by Vicki at 10:16 PM